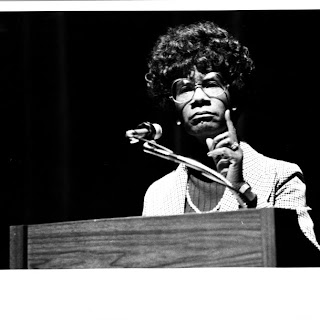 On April 21, 1969 Shirley Chisholm gave a speech to Howard University during a tumultuous time for the campus.  Emotions were high because of the assassination of Martin Luther King Jr., the discontent with the Vietnam War, and the increase in the Black Power movement on campus and around the country (Ellis and Smith).  The speech was a call for Black people to join together to fight their second class status.

This speech is ripe with womanist thoughts.  Chisholm first explains to the students why they should not just give up and go back to Africa as was often suggested.  She invites students to go back to Africa freely if that is their choice, but states that she intends to stay because her ancestors also helped to build America.  Chisholm says “the reason that Wall Street is the great financial center that it is today is because of the blood, sweat, and tears of your forefathers who worked in the tobacco and the cotton fields” (Chisholm 105).  Essentially, the country that was enjoying so much prosperity was built by people of all races.  The white people didn’t have the right to enjoy all of the spoils while giving Black people limited rights.  The Black men and women had been largely erased by historians, but their mark was still evident in the booming economy.  Their heritage, families and legacies were now found in America, not Africa.   She also points out what an accomplishment it was for Black people to have been brought to a country in chains where they didn’t know the language or culture and had been able to assimilate themselves and do what it took to survive and rise up.

In another part of the speech, she talks about the term “Black Power” and how threatening that is to so many Americans.  She uses the example of the various ethnicities that had rotated power through New York City.  Various groups of white people-Germans, Italians, Jewish people, the Irish- had taken turns gaining power as their status grew.  Now all of these people were united against Black Power, so she urged Black people to solidify to harness all of their energies (Chisholm 106-107). The feminist movement and the Black liberation movement of this time period were often contradictory.  White women wanted Black women to consider themselves women first, but Chisholm thought that was a way to undermine the Black movement.  She felt that creating dissidence amongst Black people only strove to weaken their overall cause.

This certainly did not mean that Chisholm felt she had to submit to the wishes of Black men.  As I will talk about in later posts, she was constantly fighting against men of all races who felt that she was out of line.  White men thought so because she was a Black woman, and Black men thought so because they thought it was their time to shine.  Chisholm was undeterred.